Maximum endurance and recovery after training*

VemoHerb® Cordyceps supports the oxygen absorption of cells, which helps the endurance and recovery of the body after physical overwork.*

Cordyceps sinensis is one of the most famous species from the Ascomycota fungi. Since ancient times, the mushroom Cordyceps has been used in traditional medicine as a tonic that recharges the body with energy and vitality.* [1,8]

The properties of VemoHerb® Cordyceps are due to the specific synergistic combination of biologically active substances in its composition: polysaccharides [6], cordycepic acid (D-mannitol) and adenosine. [5,6]

The CS-4 adenosine in Cordyceps benefits the normal production of ATP (adenosine triphosphate), which is one of the main sources of energy in the body.* [5]

The specific polysaccharides in Cordyceps sinensis CS-4 have a positive influence on the immune defense and liver.* [2,4] They may aid the body’s natural detoxification process.* [2,7] The active substance adenosine in VemoHerb® Cordyceps supports your vigor and endurance – both physical and mental.*

It is famous for its positive effects on the immune [2,4], cardiovascular [3,4], nervous [3,4] and respiratory systems [4,8].* Some scientific studies have also shown the beneficial effect of Cordyceps on the libido.* [4,8]

The product is suitable for any athlete or person who does sports to support their health, as it benefits the body’s endurance and energy during workouts.*

A great mystique and aura surrounds Cordyceps sinensis (syn.: Cephalosporium sinensis), an endoparasitic fungus which has claims of anti-cancer and anti-aging properties. Much research has been conducted over the years on crude extracts and its bioactivity. More research is now focused on culturing C. sinensis and on isolating and identifying pure compounds novel to C. sinensis in an attempt to alleviate strain on demand for the natural fungi. Several polysaccharides, nucleosides and sterols all have had reports of promoting health both in vitro and in vivo. Specific and novel compounds which are characteristic to C. sinensis are emerging with reports of two new epipolythiodioxopiperazines, gliocladicillins A and B capable of inhibiting growth of HeLa, HepG2 and MCF-7 tumor cells. Exclusive to natural C. sinensis, five constituents of cordysinin (A–E) has also been reported for the first time and has been linked to anti-inflammatory properties. Although it may still be premature to believe these results should translate into pharmaceutical use, there is sufficient evidence to warrant further research.

This review presents Cordyceps sinensis (Berk.) Sacc., a fungus highly valued in China as a tonic food and herbal medicine. The extant records show the continued use of C. sinensis is now centuries old. The major chemical, pharmacological, and toxicological studies on C. sinensis and the various derived, cultured, fermented mycelial products currently in use are reviewed from the English and Chinese literature. Preclinical in vitro and in vivo studies and clinical blinded or open-label trials in to date over 2000 patients are reviewed. These studies show the main activities of the fungus in oxygen-free radical scavenging, antisenescence, endocrine, hypolipidemic, antiatherosclerotic, and sexual function-restorative activities. The safety of the fungus, its effects on the nervous system, glucose metabolism, the respiratory, hepatic, cardiovascular, and immune systems, immunologic disease, inflammatory conditions, cancer, and diseases of the kidney will be reviewed in the second part of this article to be published in the winter issue of this journal.

Cordyceps sinensis (Berk.) Sacc. is a time-honored tonic food and herbal medicine in China, where recent research has shown that many of its traditional uses may be viewed from the basis of pharmacological activities. The ongoing exploration of C. sinensis in its wild form and cultured, fermented mycelial products derived from it, are reviewed from English and Chinese literature. Part II concludes the series with a review of C. sinensis in preclinical in vitro and in vivo studies, and open-label and double-blinded clinical trials on the respiratory, renal, hepatic, cardiovascular, immunologic, and nervous systems, and its effects on cancer, glucose metabolism, inflammatory conditions, and toxicological studies. In Part I, which appeared in the Fall 1998 issue of this journal (4(3):289-303), we discussed the effects of C. sinensis on antisenescence, endocrine and sexual functions, atherosclerosis, hyperlipidemia, and free radicals.

Cordycepin is a bioactive constituent of Cordyceps sinensis that has been shown to regulate homeostatic function. As an adenosine analogue, it is possible cordycepin goes through a similar metabolic pathway to that of adenosine. To investigate this hypothesis, a sensitive liquid chromatography with photodiode-array detector (HPLC-PDA) coupled to a microdialysis sampling system was developed to monitor cordycepin and adenosine in rat blood and liver. Other endogenous nucleosides were simultaneously measured to further understand the downstream metabolic pathway. The experiments were divided into six parallel groups for drug administration: (1) normal saline vehicle, (2) adenosine, (3) cordycepin, (4) normal saline + erythro-9-(2-hydroxy-3-nonyl)adenine (EHNA; a potent adenosine deaminase inhibitor), (5) adenosine + EHNA, and (6) cordycepin + EHNA. The pharmacokinetic results suggest that the levels of both adenosine and cordycepin decreased rapidly in blood around 30 min after drug administration. When adenosine was given, the concentrations of adenosine metabolites, hypoxanthinosine and hypoxanthine, increased in rat blood. This phenomenon was inhibited by EHNA pretreatment. An unidentified peak was observed in the blood and liver samples after cordycepin administration. The decline of this unidentified peak paralleled the decreased of the concentration of cordycepin, and it was not observed in the presence of the adenosine deaminase inhibitor. It is concluded that adenosine and cordycepin had short elimination half-lives and high rates of clearance and their biotransformation was suppressed by EHNA.

Cordyceps sinensis, also called DongChongXiaCao (winter worm, summer grass) in Chinese, is becoming increasingly popular and important in the public and scientific communities. This study summarizes the chemical constituents and their corresponding pharmacological actions of Cordyceps sinensis. Many bioactive components of Cordyceps sinensis have been extracted including nucleoside, polysaccharide, sterol, protein, amino acid, and polypeptide. In addition, these constituents’ corresponding pharmacological actions were also shown in the study such as anti-inflammatory, antioxidant, antitumour, antiapoptosis, and immunomodulatory actions. Therefore can use different effects of C. sinensis against different diseases and provide reference for the study of Cordyceps sinensis in the future.

Cordyceps sinensis (CS) is a well-known entamophagus fungus, naturally distributed in the Tibetan Plateau of Asia and Himalayas. Recently this synonym is transferred to Ophiocordyceps by both scientific and non-scientific communities. It is widely used as a tonic and medicinal food in traditional Chinese medicine (TCM), as it possess wonderful health benefits. To support its functional attributes, various investigations have been carried out to find out its adaptogenic, aphrodisiac, anti-oxidant, anti-aging, neuroprotective, nootropic, immunomodulatory, anti-cancer and hepatoprotective role. Its fruiting portion as well as the larvae possesses potent bio-active fractions and their composition almost found to be similar in both. The bioactive principles are nucleosides, exo-polysaccharides, sterols and, proteins, among others. Among nucleosides, adenosine and cordycepin are the major biochemical markers. Further, different types of solvent extracts and their mixtures exhibit wide range of pharmacological activities, while the water and methanol extracts with the richest sources of nucleosides and polysaccharides also show wide range of pharmacological activities. This review gives a panoramic view of potential health benefits of various classes of bio-active fractions along with the need for sustainable management of CS for human wellness.

There are no reviews yet.

Be the first to review “VemoHerb Cordyceps” Cancel reply 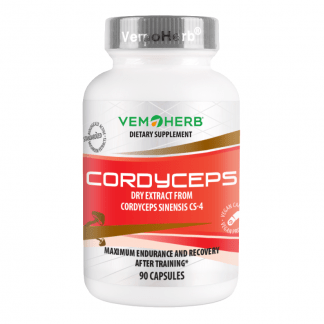