A dietary supplement based on dry extract from roots of Rhodiola rosea.

A perfect natural tonic for the muscular and nervous systems * 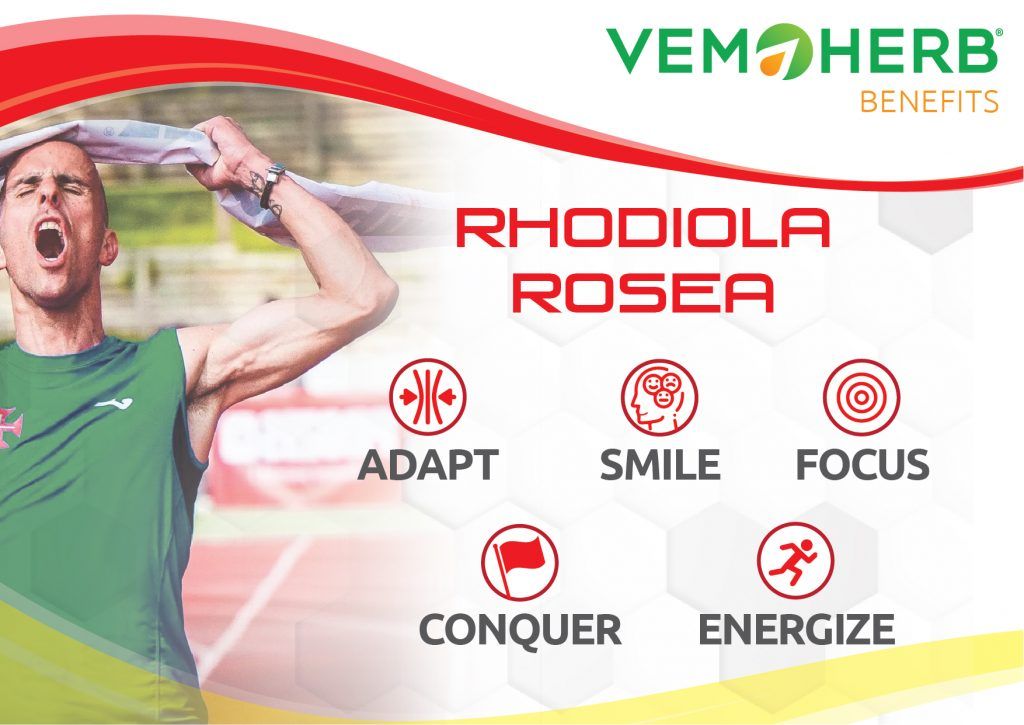 Rhodiola rosea (Golden root) is an adaptogenic herb.*[6] Adaptogens including Rhodiola are a group of plants that can help your body in adapting to physical and environmental stressors.* Rhodiola is one of the most effective in this family, due to the fact that it contains active compounds (e.g. Rosavin) that have the ability to help the natural balance of cortisol.*

Its ingredients Rosavin and Salidroside help the body’s abilities and endurance during sport and in cases of physical and mental overwork.* [1, 2]  VemoHerb® Rhodiola Rosea supports the body rid itself of toxins.* [3, 4]

VemoHerb® Rhodiola Rosea increases energy during daily trainings and positively influences the endurance, reflexes and physical condition of athletes, and it also facilitates the process of adaptation to the external environment and lifestyle.* It helps restore the mental abilities of the individual in cases of mental overwork and stress.* [1]

It influences positively the recovery due to exhaustion from exercise and increases the body’s stability.* Supports the positive mood.* [1, 2, 5]

Rhodiola appears to be able to help the organism reduce the effects of prolonged and minor physical exhaustion (from long-lasting but low intensity physical exercise) that result in fatigue.* The supplement can also help you improve your parameters of physical exercise.* VemoHerb® Rhodiola Rosea can also be used as help in reducing feelings of non-exercise related exhaustion, promoting general well-being due to its adaptogen properties.* 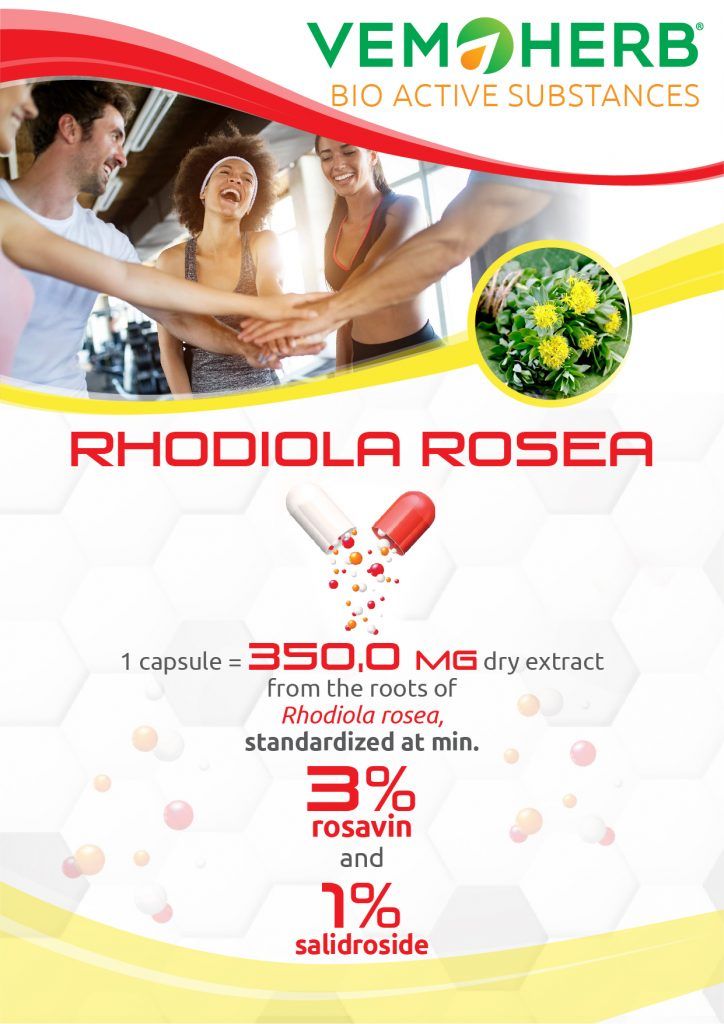 350,0 mg dry extract from the roots of Rhodiola rosea standardized at min. 3% rosavin and min. 1% salidroside 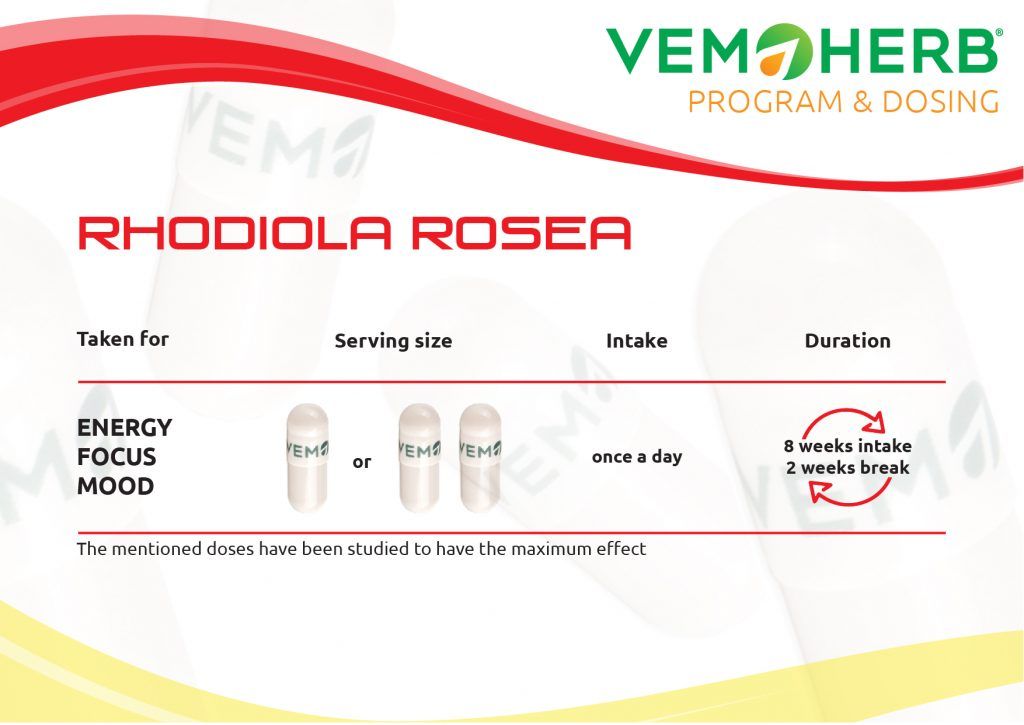 More information about the right intake and cycling, you can find HERE.

Rhodiola rosea L. is one of the most popular adaptogen and an antistress plant in European and Asiatic traditional medicine. Our previous studies have confirmed the adaptogenic and antistress properties of a single administration of R. rosea L. extract in rats exposed to acute stress. There is increasing evidence that prolonged exposure to stressful life events and depression are both related to significant behavioural, endocrinological and neurobiological changes in human and animal subjects. The aim of this study was to determine whether chronic treatment with a hydroalcoholic R. rosea extract (RHO) standardized in 3% rosavin and 1% salidroside can prevent alterations induced in female rats following 6 weeks of a chronic mild stress (CMS) procedure. This was analysed through the behavioural and physiological parameters of consumption of 1% sucrose solution, locomotor and exploratory activities, body weight gain and oestrous cycle length. After the first 3 weeks of stress, RHO was administered daily by gavage at doses of 10, 15 and 20 mg/kg for the remaining 3 weeks. In addition, the antidepressant drug fluoxetine (10 mg/kg os), which has been shown to reverse CMS-induced disruptions, was used as the reference treatment. Rats subjected to the CMS procedure demonstrated decreased sucrose intake, reduced moving behaviour, minimized weight gain and dysregulation of their oestrous cycle. Treatment with RHO completely reverted all of these changes. The effects of RHO were comparable to those of fluoxetine. Interestingly, neither RHO nor fluoxetine influence the behavioural and physiological parameters tested in non-stressed animals. These findings strongly showed that chronic administration of RHO results in potent inhibition of the behavioural and physiological changes induced by chronic exposure to mild stressors.

Research in the area of herbal psychopharmacology has increased markedly over the past decades. To date however, a comprehensive review of herbal antidepressant, anxiolytic and hypnotic psychopharmacology and applications in depression, anxiety and insomnia has been absent. A search of MEDLINE (PubMed), CINAHL, PsycINFO, and the Cochrane Library databases was conducted (up to February 21st 2011) on commonly used psychotropic herbal medicines. A review of the literature was conducted to ascertain mechanisms of action of these botanicals, in addition to a systematic review of controlled clinical trials for treatment of mood, anxiety and sleep disorders, which are common comorbid psychiatric disorders. Specific emphasis was given to emerging phytomedicines. Analysis of evidence levels was conducted, as were effect sizes (Cohen’s d) where data were available. Results provided evidence of a range of neurochemical, endocrinological, and epigenetic effects for 21 individual phytomedicines, which are detailed in this paper. Sixty six controlled studies were located involving eleven phytomedicines. Several of these provide a high level of evidence, such as Hypericum perforatum for major depression, and Piper methysticum for anxiety disorders. Several human clinical trials provide preliminary positive evidence of antidepressant effects (Echium amoenum, Crocus sativus, and Rhodiola rosea) and anxiolytic activity (Matricaria recutita, Ginkgo biloba, Passiflora incanata, E. amoenum, and Scutellaria lateriflora). Caution should however be taken when interpreting the results as many studies have not been replicated. Several herbal medicines with in vitro and in vivo evidence are currently unexplored in human studies, and along with use of emerging genetic technologies “herbomics”, are areas of potential future research.

Salidroside (SDS) is the main effective component of Rhodiola rosea L with a variety of pharmacologic properties. The objective of this study was to investigate the efficacy of SDS in the treatment of experimental sepsis in mice and explore the possible underlying action mechanisms.

Sepsis was induced in C57BL/6 male mice via cecal ligation and puncture (CLP). The animals were divided into three groups as follows: sham, CLP, and CLP plus SDS. SDS (50 mg/kg) was injected intraperitoneally 1 h after operation. Postoperative survival of the mice, bacterial clearance in blood and peritoneal lavage fluid, cytokine secretion in blood, and histology of lung were evaluated. In addition, apoptosis of immune cells in the spleen and thymus were examined, respectively.

SDS administration prolonged the survival of the septic mice, inhibited the proinflammatory responses, and enhanced bacterial clearance. It also alleviated the pathologic changes in the lung and inhibited the apoptosis of immune cells in the spleen and thymus after CLP challenge.

SDS exerts a protective effect in CLP-induced sepsis by attenuating the proinflammatory responses, enhancing bacterial clearance, and preserving adaptive immunity. SDS may be a promising therapeutic strategy for the treatment of sepsis.

Dengue is an arboviral disease with no effective therapy available. Therefore, there is an urgent need to find a potent antiviral agent against dengue virus (DENV). In the present study, salidroside, a main bioactive compound of Rhodiola rosea, was evaluated for its antiviral potential against DENV serotype-2 infection and its effect on host innate immune factors. Antiviral effects of salidroside were examined in DENV-infected cells by western blotting, flow cytometry and real-time PCR. Its underlying mechanism involved in antiviral action was determined by evaluating expression of host innate immune factors including RIG-I, IRF-3, IRF-7, PKR, P-eIF2α and NF-κB. Salidroside potently inhibited DENV infection by decreasing DENV envelope protein expression more than tenfold. Salidroside exerts its antiviral activity by increasing expression of RNA helicases such as RIG-I, thereby initiating a downstream signaling cascade that induces upregulation of IRF-3 and IRF-7. It prevents viral protein synthesis by increasing the expression of PKR and P-eIF2α while decreasing NF-κB expression. It was also found to induce the expression of IFN-α. In addition, the number of NK cells and CD8+ T cells were also found to be increased by salidroside treatment in human PBMCs, which are important in limiting DENV replication during early stages of infection. The findings presented here suggest that salidroside exhibits antiviral activity against DENV by inhibiting viral protein synthesis and boosting host immunity by increasing the expression of host innate immune factors and hence could be considered for the development of an effective therapeutic agent against DENV infection.

The use of herbs or their parts: leaves, roots, rhizomes, flowers, seeds, natural strains, as well as extracts or isolated metabolites is becoming more and more popular. Natural remedies not only act prophylactically, but also help to alleviate symptoms of many diseases and enhance the overall functioning of the internal organs. Many raw materials of natural origin plays a role in treatment of health problems, and also in case of serious diseases such as depression. Depres­sion (affective disorder) now affects about 10% of the population, but in next few years due to the development of civilization and increasing pace of life, the probable number of people suffering from this disease can grow rapidly. Natural raw materials such as Bacopa monnieri, Crocus sativus, Eleutherococcus senticosus, Griffonia simplicifolia, Hypericum perforatum, Sceletium tortuosum, Piper methysticum, Rhodiola rosea, Aspalathus linearis, Camellia sinensis, Ficus carica, Lycium chinense, Cuminum cyminum, Panax Ginseng can effectively assist the prevention and treatment of depression. Daily diet may also have positive effect in prevention of this disease. It was found that 5-hydroxy-L-tryptophan, L-tryptophan (which are precursors of serotonin in the CNS), omega-3 fatty acids and anthranilic acid (vitamin L1) are able to improve mood. L-Tryptophan, 5-hydroxy-L-tryptophan are present in the largest quantities in the fruiting bodies of edible mushrooms. Omega-3 fatty acids are found in the flesh of fish, walnuts, soybeans, beans and chicken egg protein, while the anthranilic acid is commonly found in plants.

Rhodiola rosea is a popular plant in traditional medical systems in Eastern Europe and Asia with a reputation for stimulating the nervous system, decreasing depression, enhancing work performance, eliminating fatigue, and preventing high altitude sickness. Rhodiola rosea has been categorized as an adaptogen by Russian researchers due to its observed ability to increase resistance to a variety of chemical, biological, and physical stressors. Its claimed benefits include antidepressant, anticancer, cardioprotective, and central nervous system enhancement. Research also indicates great utility in asthenic conditions (decline in work performance, sleep difficulties, poor appetite, irritability, hypertension, headaches, and fatigue) developing subsequent to intense physical or intellectual strain. The adaptogenic, cardiopulmonary protective, and central nervous system activities of Rhodiola rosea have been attributed primarily to its ability to influence levels and activity of monoamines and opioid peptides such as beta-endorphins.

Login with your Social ID
This tab is still empty.
Categories
Search 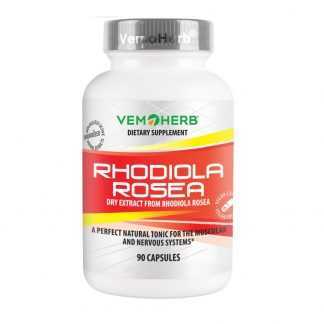