Supports:
The immune system and shows anti-oxidative properties*
The body rid itself from toxins*
The healthy lifestyle*

Supports the immune system and has antioxidant potential.*

The biochemical profile of the herb Geranium sanguineum (Bloody geranium) is well studied. The roots of this remedial plant contain tannin compounds, flavonoid glycosides, monocyclic sesquiterpenes, proanthocyanidins, anthocyanins and polyphenolic acids.* [1] The amounts of these active substances vary, depending on the plant growth phase and the collection time during the day. Happily, the extract used for the premium quality supplement VemoHerb® Geranium is standardised, so that the active substances are constantly present in the declared amounts.* 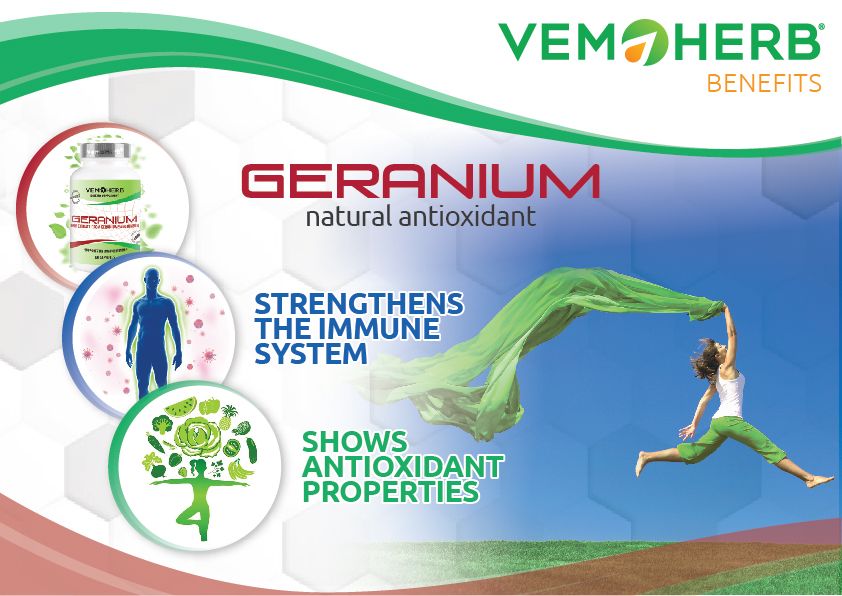 The properties of the dietary supplement VemoHerb® Geranium are due to the combination of polyphenol compounds (mostly flavonoid glycosides) and tannin compounds, which support the production of white blood cells – mainly lymphocytes – the principal part of the human immune system.* Research suggests that the benefits of the Geranium sanguineum extract are due to the whole complex of active substances, rather than a single molecule, providing some insight into their significant synergistic properties.* [2]

The quantity of flavonoids present in the VemoHerb® Geranium extract act as natural antioxidant and support the body rid itself from toxins.* [1, 3, 4] It is a well-known fact that oxidation is a chemical reaction that can produce free radicals, leading to other chain reactions that damage the cells.* Antioxidant sources, like VemoHerb® Geranium help reduce the effects of free radicals (oxidation damage) by capturing them, which plays a major role in supporting the immune function.* [1-4]

VemoHerb® Geranium helps the body in any cases when a strong immune system is needed: 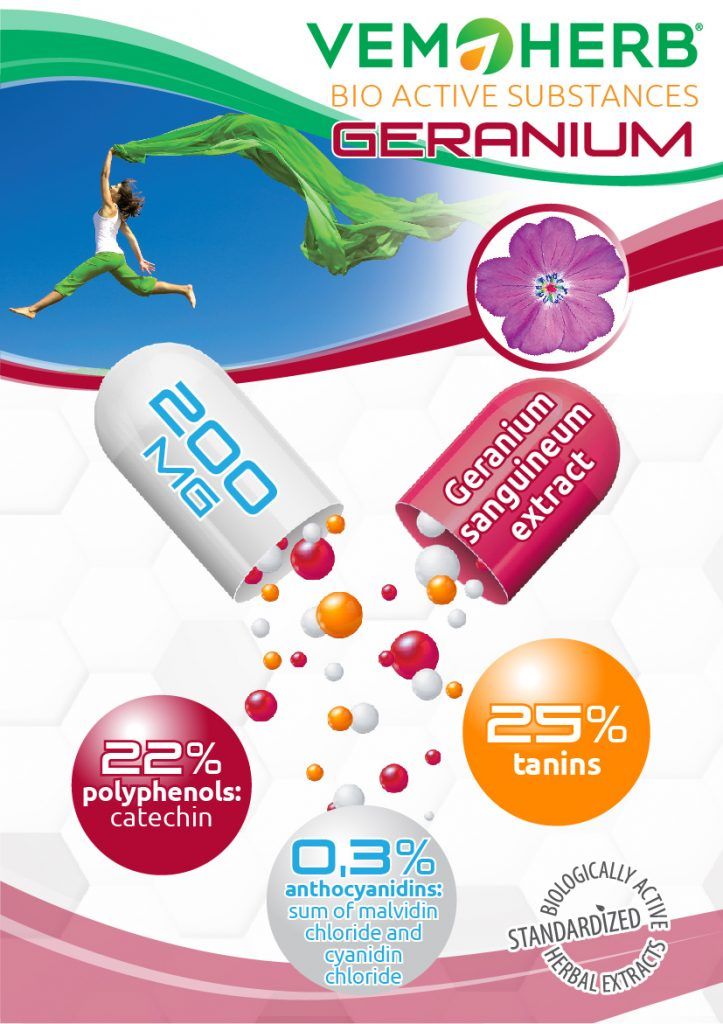 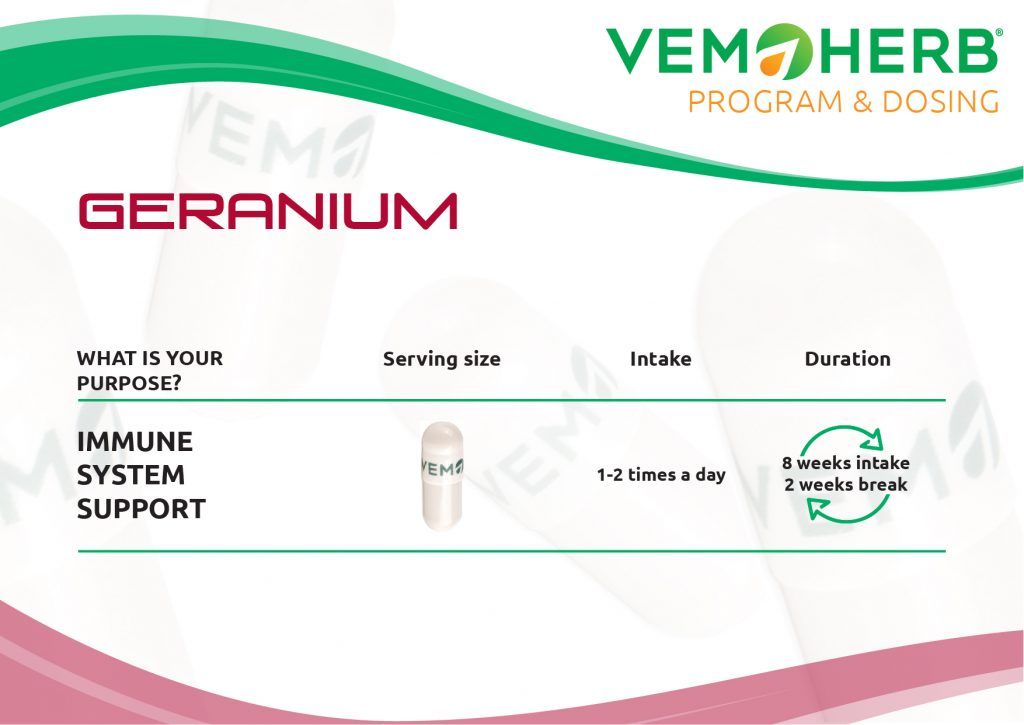 More information about the right intake and cycling, you can find HERE.

Some scientific evidence suggests that:

The extract from Bloody Geranium can be a supporting food supplement considering its radiation protective properties, thus being beneficial for people undergoing radiation therapy, or being prophylactically applied for people working or living nearby ionizing radiation fields.* [6].
This evidence is limited and not conclusive.

Some scientific evidence suggests the properties of polyphenol complexes in the extract from roots of Geranium sanguineum show remarkable inhibiting influence on the development of some pathogenic microorganisms.* [2, 4, 5] The biochemical affinity of the polyphenol molecules to the viral cover, results in binding to it and thus leads to deactivation of the virus.* [5].
This evidence is limited and not conclusive.

Inhibited first phase of drug metabolism is a main reason for numerous side effects and increased drug toxicity, observed in the course of influenza virus infection (IVI). Medical plant Geranium Sanguineum L. (GSL), spread in the Balkans, demonstrated significant antioxidant and antiviral activity. The aim of the study is to evaluate the preventive effect of polyphenol complex (PPC) from GSL on the oxidative drug metabolism in IVI.
Methods: The experimental model of IVI (A/Aichi/2/68/(H3N2)(4.5 lg LD50) is developed in male albino ICR mice. PPC is applied nasally (10 mg/kg). In liver 9 000 g supernatant thiobarbituric acid reactive substances (TBARS) and antioxidant total activity (ATA) as well as monooxygenase N-demethylase activity (ethylmorphyne, amidopyrine and analgin) and hydroxylase activity (aniline and p-nitrophenol), NADPH- cytochrtome P-450 reductase and cytochrome P-450 content are determined. Student-Fisher t-test and correlation coefficients are used for statistics.
Results: High correlation between increased TBARS and decreased monooxygenase activity (p< 0.001) is found in infected animals. It suggests that activation of free radicals can be one of the main reasons for unspecific monooxygenase inhibition, because all components of cytochrome P-450 system are inhibited (mostly the on the 6th and 9th days). PPC pretreatment demonstrates significant preventive effect against increased levels of TBRS and decreased ATA. Drug metabolism in IVI mice is restored by PPC near to healthy controls.
Conclusion: TBARS probably play important role not only in the pathogenesis of IVI, but also in modulation of hepatic monooxygenase activity. All inhibited P-450 monooxygenase activities are significantly restored by PPC pretreatment. The complex mechanism of PPC-protective effect obviously combines several biological activities- antioxidant activity, selective antiviral and protein-bounding effect. In contrast to infected animals, PPC has medium pro-oxidant and weak inhibiting effect on monooxygenases in healthy animals, probably related to its protein–binding effect on membrane proteins and enzymes.

From the aerial roots of the medicinal plant Geranium sanguineum L. a polyphenol-rich extract with strong anti-influenza activity has been isolated. To investigate its active fractions, the extract was partitioned by solvents with increasing polarity. The n-BuOH fraction contained the majority of the in vitro antiviral activity; the EtOAc fraction was the most effective one in vivo. A bioassay-directed fractionation of the n-BuOH and EtOAc fractions was performed to obtain information about the nature of the chemical components of the plant extract, responsible for the antiviral effect. The individual constituents were identified by spectroscopic methods and comparison with authentic samples and by HPLC. The cell-toxic and virus-inhibitory effects of the fractions and some individual polyphenol compounds, found in Geranium sanguineum L., were studied using the replication of representative influenza viruses in cell cultures. This study showed that the presence of a variety of biologically active compounds as well as the possible synergistic interactions between them seem to be decisive for the overall antiviral effect.

A polyphenol-rich extract from Geranium sanguineum L. (PC) protected biological membranes due to its antioxidant capacity. PC caused a dose-dependent decrease of the osmotic hemolysis of human erythrocytes and increased their resistance against the toxic effect of H(2)O(2); no effect on catalase activity was observed. While PC reduced the accumulation of TBA-reactive products in rat liver microsomes in inducible lipid peroxidation (LPO), the non-induced LPO was not affected.Further the effect of PC on the products of LPO was investigated in the lungs, livers and sera of intact and influenza virus-infected mice (VIM). The infection enhanced LPO in the lungs and livers. In the group of PC-treated VIM, malondialdehyde (MDA) in the lungs and livers was brought to control levels. PC-treatment caused a significant increase of MDA in the lungs of intact mice, a slight one in the livers and did not affect MDA in the sera. Thus the extract exhibited prooxidant characteristics in intact animals as well as antioxidant properties in VIM. The reducing ability of PC on LPO could be an alternative mechanism of its protective effect in experimental influenza infection. Copyright (c) 2008 John Wiley & Sons, Ltd.

Recent evidence shows that plant polyphenols exhibit antioxidant and radical scavenging properties. By three separate and complementary methods–DPPH assay, beta-carotene-linoleic acid assay and NBT-reduction assay it was established that a polyphenol-rich extract from the medicinal plant Geranium sanguineum L. with strong anti-influenza virus activity, possessed antioxidant and radical scavenging capacities. For comparative reasons caffeic acid and the synthetic antioxidant BHT were used. Total soluble phenolic constituents of the MeOH extract measured by Folin-Ciocalteu reagent were found as 34.60% (w/w). Further it was demonstrated that the EtOAc fraction, retaining the majority of the in vivo protective effect exhibited a strong O2-scavenging activity while the n-BuOH fraction, containing the majority of the in vitro antiviral activity provoked generation of O2-. The O2- scavenging activity of all three preparations correlated with the rate of the protective effect shown in the murine model of experimental influenza virus infection. The present results are in accordance with our intensive studies on the mode of the protective effect of the plant extract which showed positively that the protection may possibly be attributed to the combination of more than one biological activities and that the use of antioxidants might be an useful approach in the treatment of influenza infection.

The herpes virus inhibitory effect of five extracts from the Bulgarian medicinal plant Geranium sanguineum L. (Geraniaceae) was investigated. The water extract (WE) from the aerial roots of the plant was the least toxic for cell cultures and inhibited significantly the replication of herpes simplex virus type 1 and type 2 (EC50 = 3.6-6.2 microg/ml) as shown by the reduction of virus induced cytopathogenic effect (CPE) and the protection of cells in MTT assay. The inhibition was dose-related, strain-specific and depended on virus inoculum. In higher concentrations (MIC90 = 120 microg/ml) the preparation exhibited strong extracellular virus inactivating activity. The presence of WE throughout the whole replicative cycle was necessary for the full expression of the antiviral effect. In a preliminary experiment in albino guinea pigs the extract delayed the development of herpetic vesicles following primary infection with HSV-1, strain Kupka. Phytochemical investigation of the plant preparation revealed the presence of flavonoids, catechins, a polyphenolic acid and condensed tannins. The inhibitory effect of the extract on herpes simplex virus replication is related to the rich content of polyphenol compounds.

The development of standardized preparations from natural products, having radiation protective effect, acquire still greater significance in prophylaxis of contingents, receiving greater dosages of ionization radiation or likely possibility of getting such ones.

In the first group we have in mind:
1. Cancer patients undergoing radiation therapy.
2. Groups of people, feeding the reactors in NPP with fuel.
3. Military troops, located in “hot” spots on the planet where some kind of nuclear military ammunitions are used.

The second group is:
4. Employees in NPP and people, living nearby.

The idea of this study is obtaining of standard preparation of radiation protective effect, of low or practically absent toxicity which can be taken for a long period. The used in our country synthetic radiation protectors / WR- 2721, ОК – 78 /, are highly toxic and this does not allow their long application. The standard product , obtained after gradual extraction with ethyl alcohol and following sublimation drying, called Gerisan /GS/, we studied mostly at prophylactic scheme of application in mice, subjected to radiation with 10 Gy gamma-rays. We traced survival endogenous spleen colonies and phagocytic activity. Prophylactic – therapeutic scheme we applied to rats, subjected to 4 Gy gamma rays, whereof we studied blood indicators.
We administered GS also to cancer patients, undergoing radiation therapy. GS, administered preventatively, increases post-radiation survival of mice, supports post-radiation survival of hemopoeisis in rats and impacts the rapid recovery of Т-lymphocytes in cancer patients, undergoing radiation therapy.

Login with your Social ID
This tab is still empty.
Categories
Search 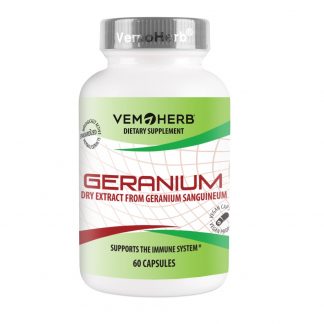