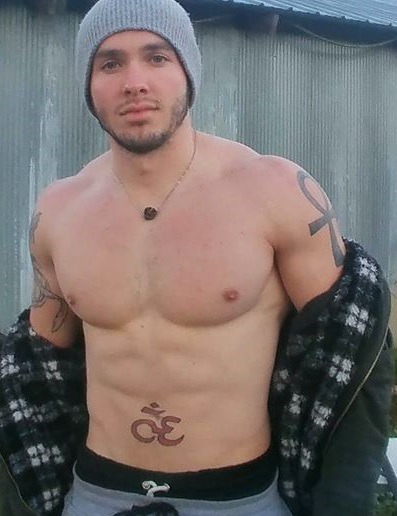 I doubt there is anyone left on the planet, who still thinks that you cannot have a muscular and strong body if you consume only plant-based meals. There are more and more examples, proving that vegan and vegetarian diet is not only good enough, but actually it is better than the meat-based diet. Many athletes perform better when they switch to mainly plant foods – they become much faster, stronger, more enduring.

But what about the ordinary guys that do not care about scores and records and they just want to look good. Is it easier to shape a nice-looking muscular body if you follow a vegan diet and additionally take plant-based VemoHerb supplements?

Well, have a look at the pictures and guess if this guy eats meat or not:

It is more than obvious that vegans are not starving poor looking guys. On the contrary, people who do not eat meat look younger, healthier, radiant and energetic.

So, we have here 2 great news:

Tait Wells (on the pics above) is a nutritionist, a natural bodybuilder, founder of Velite Nutrition and Fitness. He is dedicated to bringing you essential health information that is scientifically supported and to help you reach your goals, naturally.

We are honored to be contacted by such a brilliant role model and fan of VemoHerb products:

Tait Wells: Hello, are the owners of this company vegan?

VemoHerb: As a matter of fact, the founder of the company is а vegan and most of the team members are vegan or vegetarians.

Tait Wells: Keep up the great work my friends, as a natural athlete I love your supplements!

VemoHerb: Thank you so much! We definitely appreciate it. And I must say, you look great! More people need to hear and actually see that healthy + fit doesn’t include so much meat.

Tait Wells: Thank you guys so much! I decided to become vegan because I had health complications like asthma, food intolerance, and chronic fatigue. Going vegan allowed me to live much healthier; the fact that it is so much better for the animals and the planet in addition to our bodies is a huge added bonus. To stay in the shape I’m in, I make sure to consume wholesome vegan food, get plenty of sleep, lift with adequate intensity, and also, I supplement with the maral root / rhaponticum extract that you guys carry Can’t wait to try the Rhodiola and Gingko biloba. Thank you guys for being an amazing company that carries natural supplements and cares for animals, people, and planet, you will always have my support

VemoHerb: For how long you’ve been on that regimen?

Tait Wells: I have been vegan for 7 years now since the age of 17, and I began weight training around 2 and a half years ago

VemoHerb: Was is it easy in beginning?

The many taunts I’ve received on my journey as a vegan in Mississippi. The amount of criticism from family, friends, and associates was overwhelming, yet also very fueling at the same time. There came a point to where I wouldn’t even tell anyone I was vegan out of fear of judgement.

I initially started my fitness journey around 2 years ago to prove wrong the doubters and the naysayers, but as time has passed it has become more about enjoying the journey and showing people that you CAN be healthy as a vegan, and you CAN be a great athlete as well. Science clearly and demonstrably shows that, along with my personal experience as a vegan athlete; not to mention the many other vegan athletes around the globe who are literally setting world records in their various disciplines.

Although I still encounter quite a bit of resistance, and I respect everyone’s personal choices, I’ll continue to stand by veganism as not only a healthy choice, but also one that creates a cleaner and more peaceful planet. Whatever dream or goal you may have, set your heart to it and give it your all, stay true to your ideals, and I guarantee you that you can achieve it

VemoHerb: And the tattoo symbol “OM” – do you do yoga?

Tait Wells: Yes, I do yoga, I got the tattoo when I was much younger, around 18 or 19. Though, I am no expert in yoga. I just find it is a nice, gentle compliment to the hardness and rigidness of weight training

VemoHerb: Yoga is good for flexibility and teaches you proper body alignment which is extremely important in any exercise.

Tait Wells: Very true, posture is something I actively work on because I grew up very sedentary, playing video games …yes, yoga is great!

I was never too sporty before becoming vegan because I was always fatigued, but now in addition to bodybuilding I love powerlifting. And occasionally playing football or basketball with friends, too.

I find Ecdysterone makes you feel much more powerful in your training, recovery is better, and the muscles are fuller. I have only been taking VemoHerb Ecdysterone for around two weeks now and I already notice these incredible changes. Outside of personal experience, the science for rhaponticum is certainly there, it is a legitimate product

And thank you guys for your passion for health, the environment, and the animals, much love!

VemoHerb: I do not see you doing lots of deadlifts?

Tait Wells: If you guys are wondering why you haven’t seen any deadlift content from me, I’m putting it on the backburner until it matches my squat numbers.

Also, after discussing the biomechanics of conventional deadlift with some friends, I’ve decided to adopt the “sumo” stance instead. I’ll elaborate on this in a future post, but the major reason being it transfers load away from the spinal erectors and employs moreso the quads, glutes, and hamstrings. This means potential decrease of injury, massive carry-over to squats, and (in my opinion from the research I’ve done) much more conductivity to longevity within the sport of powerlifting

VemoHerb: What should I eat as a vegan?

Tait Wells: This is a question I’ve been getting a lot recently, and understandably so. Although awareness is growing rapidly about veganism, a lot of misinformation and confusion remains extant in the nutritional arena regarding how to properly follow a plant-based nutritional regimen. In this post, I hope to clarify what constitutes a proper vegan diet and what you should consume on the lifestyle.

A whole-foods, plant-based vegan diet ideally consists of fruits, vegetables, nuts, seeds, beans, and grains. The extent of variety or emphasis on a particular food group is up to the individual, though I personally recommend a variety of colors and a balance of both raw and cooked foods. Although this sounds boring on the surface, there are a number of websites out there that have countless vegan recipes that are only a search away.

It’s important to supplement with a quality full-spectrum multivitamin, multimineral supplement and ensure adequate intake of omega 3 fatty acids (for both vegans and non-vegans) through seeds rich in this critical nutrient, such as chia, flax, and hemp seeds.

My favorite vegan meal would have to be either smoothie bowls flavored with cacao or acai berry and topped with fruit, or mung bean soup with buckwheat flatbread

If you are a strength athlete, it is also highly advisable to use creatine monohydrate to your advantage, as it has been shown to substantially improve strength and even cognitive function.

Other than that, it is really that simple guys.

VemoHerb: What are the common misconceptions about veganism and plant-based nutritional regimens

Tait Wells: Many individuals I’ve talked to that want to make the transition to the vegan lifestyle have expressed concerns about meeting their nutritional requirements in adopting a plant-based diet. Considering the abundance of misinformation floating around in the mainstream nutrition arena, this concern certainly isn’t unfounded.

There’s no reason to have any concern about nutritional deficiency when following a properly planned plant-based diet. Supplement with a full-spectrum quality multivitamin and eat a variety of whole plant foods such as fruits, vegetables, nuts, seeds, and beans and your health will thank you for that.

Precisely, I’ve told myself I will never take the “synthetic” route to improving physical performance, and I chose to seek out natural performance enhancement instead. Very grateful that I found such a wonderful company, the planet needs more people and companies like you guys.

VemoHerb: Мuch love to you, as well. The planet needs more people like you, too!